Stephens Boats: the Birth of a Legend

It all starts in a garage in Gippsland, Victoria, in the early 1970s with two men by the names of Ben Probich and Graham Stephens. They created and built a 16-4ft Clinker sided fibreglass race boat named “Susan-Dee”. It made its debut at the Eppalock Gold Cup, Victoria, powered by a 351 Cleveland engine which was driven by Harvey Gun and in later years by Ben Probich.

If anyone has a photo of Susan-dee please send it in to us.

Following on there was “Tiger”, which circuit raced with huge success, also being powered by a 351 Tunnel rammed (2 x4 barrel carburettors) Cleveland engine as Ben was “a huge ford fan!”
Along came Allan Beale, whom had made a great name for himself in the circuit racing scene. “He was the guy to beat!” Allan’s boats had Chrysler 6 cylinder HEMI engines, in which he took to victory on many occasions, further on leading him to build a V8. With Allan’s purchase of a Stephens called Lobo off Allan Day Senior, he then changed its name to the now famous “Psycho!” Allan then booked a flight to the USA and came back with all the best gear to install a roller cammed small block Chev. This was a huge thing in its time! Very significant. Allan Beale worked with the current owners of Stephens at that time, to build develop an 18ft Stephens. In later years it soared the way to great success! Not only in circuit racing but also other forms like ski racing and drag racing. With boats like Hombre and Rolco to name a few!

If anyone has an early photo of Rolco please send it in.

Also making a great ski boats as well! Allan Beale then purchase Stephens Boats in 1977. With Allan having a great racing career in power boats the old saying was “race on Sunday and sell on Monday”. He always had an eye for detail. The legend of Stephens was forging its way into the hearts of the Australian boating public.
Along came the ‘80s, the start of a new era. The 18-6ft flat bottom had the sides cut down, and the bottom was modified to become a tunnel runner, which was a new rule for the racing division at the time. The deck had a subtle face lift, and the TR1 was born. Next along was the 16-4ft that was cut down in the side to a length of 15ft and was given the tunnel runner bottom modification. The deck was changed to resemble its big brother, the TR1. Now there is a 15ft tunnel runner built to take on the ultra-competitive 4.2LTR class, which it did then and still does now, making up the field. In the early ‘80s, we saw the adding of yet another three models to the range. Firstly was the Beismeyer, a 18ft flat bottom designed for the circuit and drag racing.
The Californian Vee was next, a mould from America. It was originally designed as a jet boat; however, the Californian Vee got the “v bottom” blueprinted so it could be used as a v-drive. The options were a jet boat, v-drive, and outboard. It was a good all-around model with good success in drag and ski racing. Thirdly was the Demarco hydroplane a circuit and drag boat, with huge power = huge speeds. A mould was bought from Sydney and put into production. The end of the ‘80s was fast approaching and so was the end of a new project that Allan Beale and Alan Healy had been working on. These were exciting times that would see the beginning of a new era for the Stephens Boat name. The 18V Stephens was a boat that shared the same footprint as the 18ft tunnel runner but with a 14-degree V-bottom and smooth sides. This was sure to be a winner! Available as a mid-mount, rear mount ski boat and ski, drag or circuit race. The 18V Stephens has broken and still holds many records including a World Blown Alcohol Displacement Title by “The Boss”. 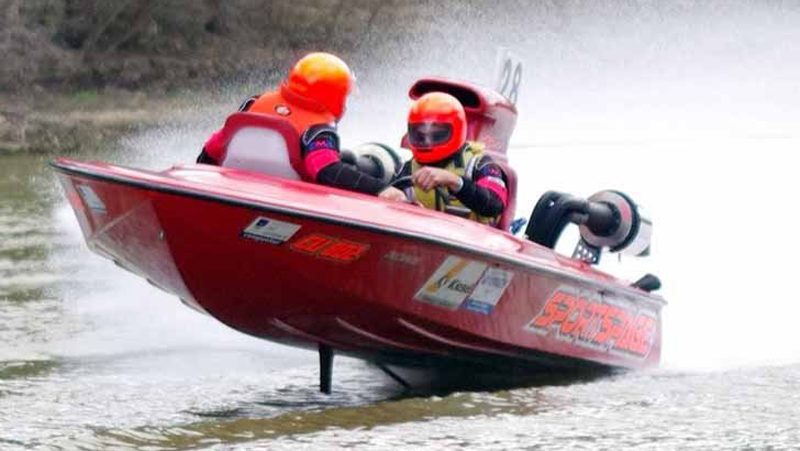 The Boss is powered by just a small block 410ci Rodeck Chev; when the air gets under the Stephens hull she pushes upward of 130mph. The deep-V makes for fantastic cornering capabilities and rough water handling, plus the boat accelerates very hard coming out from the corners. Driver Tim May is certainly not to be underestimated either — not by any means. This highly experienced racer complements the boats qualities with exceptional skill displayed time and time again. Never any foul play from the man either — Tim always gives his fellow competitors enough room in the corners to race comfortably. Tim also drives the Boss with only one arm. With the huge success of the 18V, we saw the need for a bigger boats. As the horsepower grew and technology getting better, so did the boats. The new release of the 21V Stephens, built from the 18V and stretched — this boat had all the right ingredients. The 21V came to be another huge success, from circuit to ski and drag racing. With podium after podium, the 21V Stephens was and still is a huge success. ’’If you didn’t own one! You wanted one!” To this day they still hold records that may never be broken. Naming a few 21Vs, there were The Chameleon, On Edge became Subtle, The Edge became Knockout, Eruption, Psychos, Sledge Hammer, Precision, Doin Time became Mr Motorsport, Smooth Operator, Let’s Cut Loose, God’s Gift, Noizworks, Nemesis, Wildfire, Fierce, Moonshot became Rebel, then Totally Senile and Nightmare. Having the 18V and the 21V Allan wanted more of a social skier–friendly boat that had more room than the 18V but less deck and the length of a 21V. From the combination of the two, the 19V evolved. The 19V is a great mid-mount ski boat, in the added option of a windscreen, with the standard inclusion of a double observer’s seat. The 19V makes an awesome rear mount hoon boat with the capabilities of great things that you would expect from a Stephens V-Series boat. Some of the race boats were Special Edition, Gassa, Hagar became Rolco, Arrogant, Something Different, Heaven Sent, The Spook, Dominator, Bad Attitude, Oblivious, Unleased, Cut Loose, Eclipse and Showdown. In 1995, Magic ski boats were purchased from Brian Neal and was added to the Stephens Boat range. The Magic was purely designed as a social ski boat. Being the newest member to the ever-growing Stephens range kept Allan busy until he sold his business in 2000 to his boat builder at the time, Simon Callow . Simon with the help of Allan were some of the first to fit an LS1 5.7LTR all-alloy Chevs into a ski boat and offer it as a package. From this, the Magic had optional extras added to it and became the GTO. Maverick Marine at that time became a Stephens dealer and in the first year sold a lot of Magics. In 2003 Maverick Marine brought out Stephens Boats including plant and equipment and moved to its new location in Corowa, New South Wales, from ‘03 to present. Maverick have since added the following models.
21ft Experience, Image & M2. 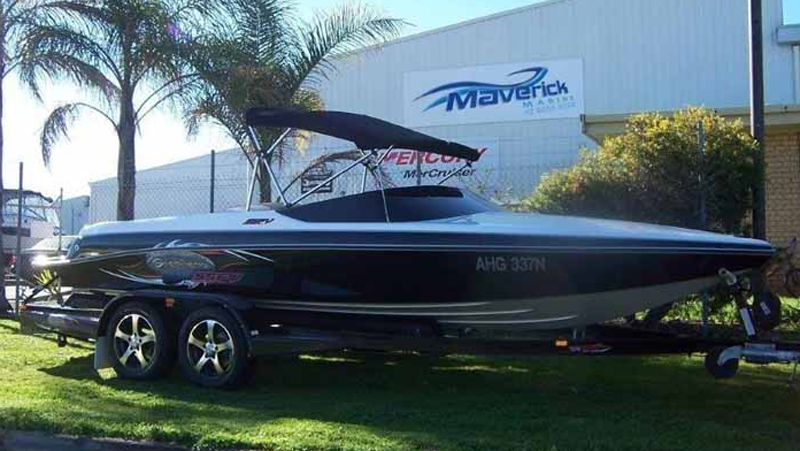 Stephens Boats is committed to forge ahead with the development of future growth of the range of boats, “always thinking out side the square”. You will have to wait and see and watch the history unfold!